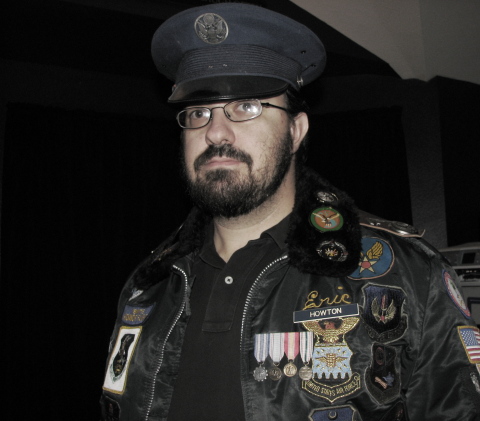 Its that time of year again where I don my colorful jacket representative of my many tours of duty. When I was younger, veteran's were old men. When I became one myself at 27, it felt weird. I was always the youngest member at the VFW. But as 40 approaches, I can take solace in the fact that I'm becoming that old veteran, certainly by the age of those currently serving.

Today at work there was a ceremony for veterans and that's when I discovered a new bill having been passed into law last month allowing veterans to salute the flag out of uniform. Most of us tried it out during the playing of the National Anthem, and I have to admit, it felt weird.

Then I called my wife's grandfather, who was flight-crew navigator on board bombers during WWII.

WASHINGTON -- Veterans and active-duty military not in uniform can now render the military-style hand salute during the playing of the national anthem, thanks to changes in federal law that took effect this month.

“The military salute is a unique gesture of respect that marks those who have served in our nation’s armed forces,” said Secretary of Veterans Affairs Dr. James B. Peake. “This provision allows the application of that honor in all events involving our nation’s flag.”

The new provision improves upon a little known change in federal law last year that authorized veterans to render the military-style hand salute during the raising, lowering or passing of the flag, but it did not address salutes during the national anthem. Last year’s provision also applied to members of the armed forces while not in uniform.

The most recent change, authorizing hand-salutes during the national anthem by veterans and out-of-uniform military personnel, was sponsored by Sen. Jim Inhofe of Oklahoma, an Army veteran. It was included in the Defense Authorization Act of 2009, which President Bush signed on Oct. 14.

The earlier provision authorizing hand-salutes for veterans and out-of-uniform military personnel during the raising, lowering or passing of the flag, was contained in the National Defense Authorization Act of 2008, which took effect Jan. 28, 2008.