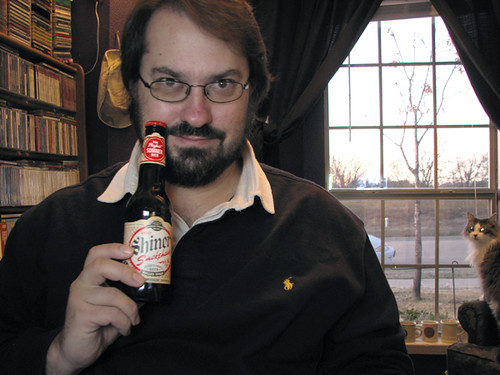 ehowton & friend
I like good beer. Crisp pilsners, flavorful ales, strong stouts and light lagers. In Germany the beer you order is served in that beer's branded glass, and outside a fest stein, a glass particular to the type of beer ordered. Pilsner comes in a pilsner glass, weizens in a weizen glass, and so on and so forth. Drinking beer in Germany is not just a pastime, its an entire culture.

In England, due to strict regulations, all beer of any variety is mandated to only be served in an "Imperial Pint" that is, a bulged conical glass with the mark of the Queen etched into it certifying that you are being served a full legal pint. And let me tell you - those of you who've never tasted unpasteurized British beer have zero comparison to the bottled stuff they export to the United States.

I get downright giddy when I think of my time overseas, and all the fantastic beer I consumed. Sometimes, cracking open a mini-keg of German beer, I weep. I weep for what's been lost in the pasteurization process. Then I drink. I drink and weep. But eventually the beer cheers me up and I stop weeping.

Now some of you may have heard that us Texans are a rather proud people. And while that's true, we're also usually pretty honest. If something sucks, we'll say so, even if its to our own detriment. Its a matter of pride (see how that works?) For example, I'm not a fan of domestic wines, and of all the domestic wines California wines are the bane of my existence, but I'll be the first to say that Texas wine is worse. We simply do not have the ability to produce good wine. But we do make good beer.

Enter Spoetzl Brewery. I won't repeat anything you can read on Wikipedia, but it was during my Pilsner Urquel days in STL that

drax0r called me, begging me to try Spoetzl's flagship beer, Shiner Bock. As many of you know, I'm not what you'd call an, "early adopter" so I dismissed him until I could no longer. Many kegs of the stuff later, I became an outspoken proponent of the work they were doing in the little brewery in Shiner, Texas. I love their bock, I love their black lager, and I love their 100th anniversary doppelbock. For the United States to have a beer this good, makes me weep less.

drax0r discovered Shiner Smokehaus. Once again, I didn't have time for his "Ooooh, shiny!" behavior. And much like the time he bought Boondock Saints for me because I wouldn't have otherwise watched it, he also bought me entire cases of Shiner Smokehaus. Sadly, he always ended up drinking them before I had an opportunity to upturn the bottle to my lips.

So there I was, gearing up for

unixwolf's visit to Anna when I spied a six-pack of the stuff in the cooler nestled between other flavors of Shiner. A lightbulb went off in my head, and I picked it up. When I got home, I cracked it open. And Just like the scene in Ratatouille when the food critic is instantly transported to his happy childhood at his first bite, so it was with me when that delicious beer entered my mouth, and swirled down my throat. I was in my father's backyard and he was smoking brisket on the smoker, with a side of smoke.

You see, Smokehaus is brewed with malt which has been smoked with mesquite. And while it seems unlikely that this would affect the taste of the beer much, I assure you, I was drinking a smoked brisket. It was fanastic. Some of the beers overseas are so filling, they're affectionately called, "liquid bread." I've had those beers - its not an exaggeration. I submit to you, dear reader, that I was drinking "liquid smoked brisket" and God was it fantastic. I've never (and I mean never) tasted anything like it in all my travels of this globe. Belgian monks? Pussies.