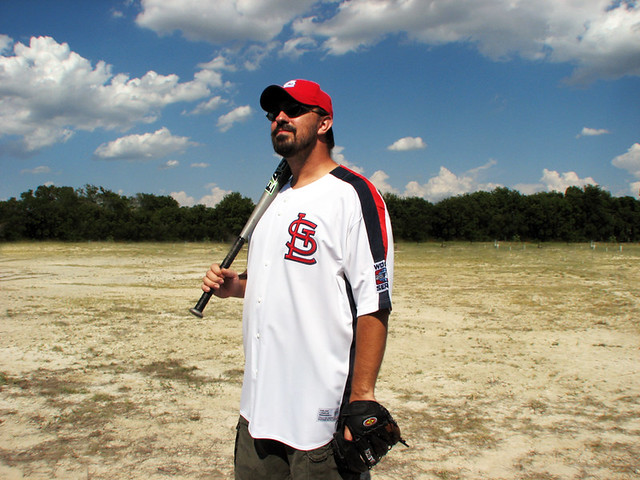 For those of you not in the know, we've dropped TaeKwonDo for a little while. We don't pay escrow on our home, so when its time to pay the piper, we do so ourselves. And with my wife having been steamrolled out of a job over a year ago, this time it meant doing without.

So while I was failing miserably at maintaining the same level of activity as I had been with martial arts, but still practicing at home, I've now swapped the two - I no longer practice like I should, but my activity level has doubled...all because of Sandlot baseball.

At first I was doing it (not begrudgingly mind you - but nor was I enthusiastic - it is, after all 100+ degrees here everyday) for the kids. But as it plays out, their sharply increasing skill (Turns out its my responsibility to teach them how to play; they're quite adept at learning!) was on a reverse-course with my waning disinterest. I now play just as hard as they do, and I'm doing it as much for myself as I am for them.

We're out there between two and three hours a day at 400-calories an hour. I don't just scream at them at the top of my lungs to hustle (which you know I do), but I'm doing it to. What a great, fun, exciting, exhausting evening I've had every evening, for the last 9-days (we took yesterday off for a much-needed rest). I'm so far behind on livejournal its not even funny. And its not like I'm not soaking my aching carcass in a hot epson salt bath either when I'm not playing if you're curious where the time goes.

I was also introduced to my hamstring Sunday night. It just jumped up, bit me square on the ass and said, "'Allo, govn'r!" So yeah, that made things interesting too - to pick balls up from the ground, I shit you not - I had to arabesque to reach them. Yikes! I start each game off with a practice warm-up. I've taught my son how to properly hold a glove and catch different types balls being thrown and my daughter how to hit. Apparently the bat I bought (Little League Official size & weight) was too heavy. She does great with a 7-oz "girl" bat (they come in pink).

As an aside, since so many people show up, they all bring a variety of gear, and my bat of preference is the pink Easton Women's Fastpitch Softball bat, "RAMPAGE" which I enjoy announcing loudly a'la UT2k4 every time I'm up to bat - the neighbor kids love that.

Anyway, the kids have also outgrown their mitts since 2007. I dunno, apparently kids do that. Grow 'n stuff.

Sunday night I had an unprecedented TWENTY-FOUR people on the field. That's not counting spectators. I never saw the movie Field of Dreams but I built it, and they *did* come.

We played for two and a half hours.

Two nights ago we only had 10 players so

onthetrails suggested everyone man the outfield while two batters attempted to make it around the bases. If you had an out, or failed to be batted in, you rotated out. If you made it, you batted again.

Everyone just stared at him, slacked jawed.

Then I announced to the entire field, "Remember the 'Assualt' game on Unreal Tournament 2004?"

WE ARE DEFENDING. THEY ARE ATTACKING!

Yeah, that worked. Put things in video game parlance, and the game was afoot!

I'm sure our care-free days of playing until nightfall will come to an end here soon; school is starting and the daylight will slowly recede. But I want to say for the record that this has been one of best summers for me in recent memory, and gauging the children's level of participation - their's too!
Tags: gaming, kids
Subscribe