I was introduced to QuikTrip the year I commuted to Wichita. It was on every corner of every intersection and they had GREAT coffee (and the best prices on smokeless tobacco, too). I was never much a fan of RaceTrak however, because of the one on 380 & 75 back when the only thing on 380 & 75 was RaceTrak and Taco Cabana. Why? Because they didn't have "Pay at the Pump" when everyone else did, which might have been less of a problem if they had at least taken some form of payment other than cash. But they didn't. And you couldn't go into the store after 2200 (10:00 pm).

So there I am, working nights, pointing at a bag of Doritos and SCREAMING at the top of my lungs through thick glass to an Indian gentleman who doesn't understand a word I'm saying, or what I want. Every once in a while he would leave the "after hours" window to wander the store in the general direction of my pointed finger and bring back something which must have sounded like "D O R I T O S" to someone from the sub-continent who spoke English as a second language. Exasperated of course I usually just ended up buying whatever he happened to bring me.

I think that was the first time I ever had pig rinds and chocolate Yoo Hoo! So yeah, screw RaceTrak.

Introducing 2/3 "Molten Lava" + 1/3 Extra-Caffeinated "WATT UP!" = Incremental Resilience to Inanimation.
And I rolled double-damage upon the discovery that I could purchase it by the pound.
For the first time in 11-years I rate RaceTrac above QuickTrip.
The King is dead, long live the King!
72-hours this week.
Ugh. 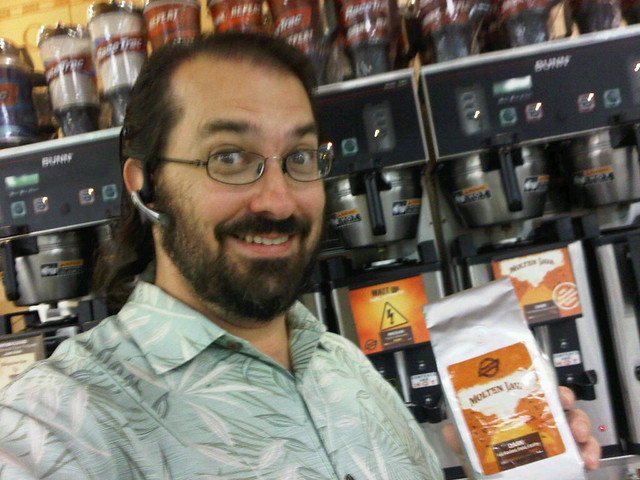