I was unusually fortunate in that two of the eight "Wonders of Kansas" happened to be in the same small town - Hutchinson. Closer than my previous outing to Manhattan, but ultimately more exhausting - two "wonders" in a day was simply too much. And I'm only 40! My great-grandfather-in-law is FIFTY YEARS OLDER THAN ME. I hope I have as much energy when I'm his age. Add to that exhaustion, though I was promised the day off, I ended up working until midnight the night before on an "emergency" (no loss of life, so...) at work and six hours into my day I was recalled. Fortunately we had just completed our tour of the Kansas Cosmosphere! (A Smithsonian Institution Affiliation Program)

Nose-to-nose with the SR-71

While the SR-71 is always an impressive display, this wasn't my first rodeo. But I have to admit to being very impressed by its stance. It was angled downward, and you could go right to the front of it and look up at it eye-level. It was a terrible and awe-inspiring sight to behold! And this display was just the proverbial tip of the iceberg. We spent two hours in that place but easily needed another two.

I am a jellyroll.

The first part of the tour concerned itself with the technological advances of Nazi Germany during their war effort - the events which lead to the space race. And this was Bill's era, having served in WWII for this purpose. Also having myself grown up under the threat of nuclear apocalypse and later serving during the Cold War years, I found myself learning entirely new things concerning its inception - all tied back to Nazi Germany. It was fascinating! I wasn't expecting to learn as much as I did when we set foot in that place. And with Germany having been my first duty station, I was amazed at the museum's attention to detail. Very well done. Even Bill said it 'refreshed' many things.

The majority of the aptly named "Cosmospshere" was dedicated to the Space Race. And having grown up an All-American Boy in urban metropolis, USA I was quite familiar with each step and portion of our endeavors. THE COSMOSPHERE GAVE EQUAL TIME TO THE SOVIET UNION - something I was very nearly entirely ignorant of! It was fascinating to learn brand new stuff! Not only the attention to detail, but the 60-second films and genuine space-worthy artifacts! Again, I was not anticipating learning as much as I did. This was a perspective I never had growing up. I was a schoolboy all over again.

After the expansive entrance with with SR-71, we went down two flights of stairs through the start of the museum and were just heading into the Sound Barrier room from the WWII room when Bill wanted to head back to the restroom. Two flights of stairs up and across the entryway and he was winded. Did I mention he's older than me more than I am old? Two things - while they didn't have a fleet of electric wheelchairs for loan like they did at the Salt Mine, they did have one for use. And - we had the place to ourselves. I will ALWAYS take him on a weekday. Sure scheduling a day off in the middle of the week is a bitch, but this ease is the fruit of that labor. One giant leap. 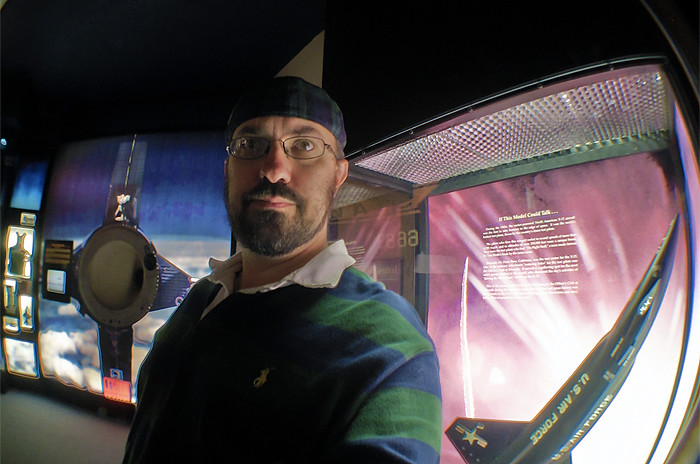 I have six more "wonders" to see. If we stay on schedule (one per month) we'll be done by the middle of 2012. Wherever shall we go next?