It was actually my wife who first said, "Wow, I can't believe what a great soundtrack this has." Which is funny, because that's usually my line, and I was - just at that moment - thinking the same thing.


Having never heard of it, my wife had added it to our Netflix cue because it "looked interesting" or perhaps it was "might be good"; I was enamored nearly immediately, being blown away by the actors, their lines, and the slick modernization of the entire franchise. And yes, the music.


During one break we took midway between the lengthy pilot I sneaked into my submersible and frantically searched for the score, for surely anything on Netflix is old enough to have such a beast, no? No. The only thing I found which came close was a David Arnold piece for a mini-series. But wait! Mini-series as in BSG before-it-was-a-series mini-series? David Arnold? Really? Really.


I remember thinking of the harpsichord sound in Hans Zimmer's recent Sherlock Holmes and how I was surprised I was that this was so similar in composition. But then I remembered all I don't know about scores and music and the marvelous ability to make someone believe their somewhere else just through the magic of music alone. I was still roaming Victorian-era London, albeit in modern times. We've changed more than London has over the centuries, and David Arnold managed to bring us right to that point in time, and race our hearts as we race the streets and alleyways when the game is afoot! 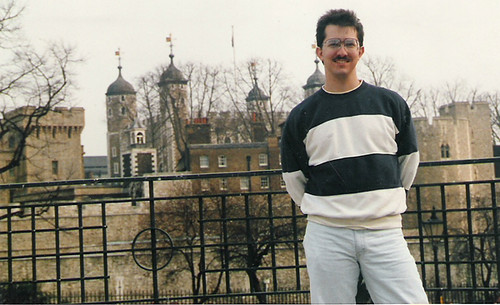