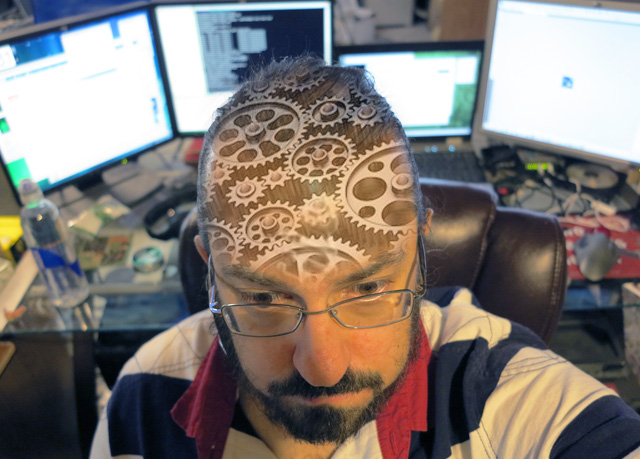 From the Stanford Encyclopedia of Philosophy:

Yet there are those who believe everything has a simple answer. While I cannot effortlessly digest and reiterate the above, it does seem to indicate that there is much more complexity around us than some are willing to admit. As for me, I strike for balance. Not over-complicating things which may actually be more simplistic, while refusing to distill complex matters so far removed they lose their inherent complexity. A daunting task indeed!

If we all agree that life is (in part) a balance between our needs and desires, our abilities and our goals, and our logic and emotion, then too much of any one could certainly disrupt our expectations, making any variance appear extreme - especially given not only are our own balances highly subjective, but also our very definitions of what constitutes a "cause" and what constitutes an "effect." There are costs to always following the path of least resistance as well as only ever toiling. Because we each choose our own path, I am not discouraging any particular way, only that one must be aware of where each may lead. We are also not tied to any particular outcome. If something is not going how you would like, change a variable and try again.

But variables can be tricky things to those who disbelieve causality. It was Einstein who quipped that insanity was doing the same thing over and over again and expecting different results. Variables must be identified and tweaked - adjusting the fulcrum closer to one end or the other; yes more force must be exerted to obtain the desired results - its embedded in the mechanical underpinnings of life. This is how life works.

I often consider causality in my decision-making process, but as with any human, I have my flaws. Change isn't nearly as funny as people are about change. "I knew that would happen," they say when something unfolds as they predicted, as if imbued with magical gifts of precognition they call, "common sense." What is fascinating is what they say when they're wrong. Nothing. Unless pushed. Then excuses. Never ever a change to their rigid paradigms which may require updating.

I was attempting to articulate a particular change to one of my paradigms the other day to my mother when she replied, "I know you'll make the right decision." Parents believing their children are somehow special is nothing short of a proverb, so I immediately inquired as to how she "knew" that to be the case. Her answer surprised me. "Because you always weigh all the alternatives and understand the consequences of whatever decision you make and no matter how difficult it may be, you chose the right thing to do for all parties involved and accept any repercussions."

How can I argue with that?

I have many flaws. But flippantly making a selfish decision isn't one of them. There's too much involved, and even I am smart enough to acknowledge that.
Tags: ehowton, philosophy
Subscribe
Comments for this post were disabled by the author