From One End of the Spectrum to the Other: My Texas Weekend

My mother has been hospitalized for the last 12-months dealing with an autoimmune issue so I took the opportunity to visit with her Friday and Saturday in Fort Worth before my uncle's memorial Sunday; I left for East Texas Saturday afternoon and through a comedy of errors, wound up attending an event hosted by the Secular Humanist Society of East Texas which culminated with this presentation on the Ten Commandments (:37) by the Texas State Director of American Atheists, Aron Ra at the Stephen F. Austin Campus in Nacogdoches.

Since I crashed their party, I provided beer for the entire group, which was well received. I ended up having a blast visiting with everyone there, even meeting a guy who'd belonged to the same church to which I'd belonged the first half of my life, the now-defunct Worldwide Church of God and who's wife was in the same narrow field of intelligence I was in while serving in the Air Force. On the funnier side of things there was one girl who in realization asked, "Are you not an atheist?" When I shook my head, "No" she nearly shrieked, covering her mouth, "Are you a theist?" I had to laugh.

Afterward, I drove to

drax0r's house in nearby Diboll where we stayed up late visiting and playing with bebe's. Late the next morning I attended my uncle's memorial service in Lufkin at the charismatic Word Of Life Church - the irony of which was not lost on me, as it was night-and-day compared to the previous night's activities. Both groups of people were exceptional and I sincerely enjoyed my time with each.

I drove back straight through from Lufkin to Newton, 8.25 hours. 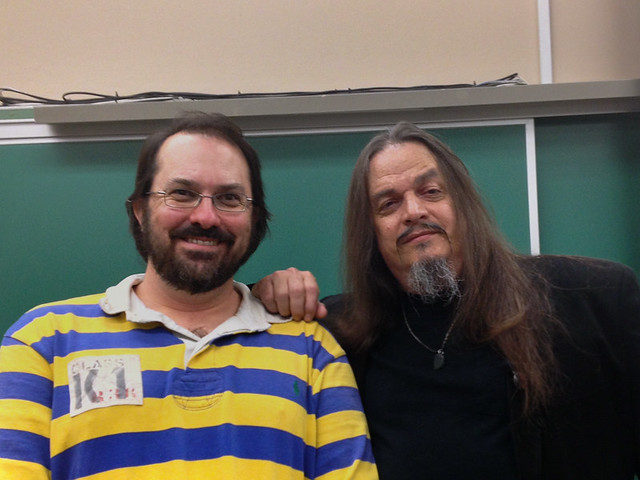