There and Back Again

Spent Wednesday through Sunday in Pawnee Rock, came back home and Dad arrived unexpectedly Wednesday, staying through the holiday leaving Sunday morning. Was off Friday for the 4th so deep cleaned the house in preparation for a small get together prior to fireworks. In attendance were my father and I, Dorian,

michelle1963 and her roommate, one of her roommate's guy friend (who'd I'd been wanting to meet) as well as both kids at one point in time or another as they popped in and out all weekend. Bill was invited but he declined as he's 93, and

The party disembarked prior to the launching of the ground war (which reminded my father of a firefight in Fallujah, not that he's ever been, but he had just watched American Sniper) and a fantastic time was had by all. We'd spent the night across the street where I played Beer Fairy (meeting some new people by delivering further out) and made my neighbors strawberry margaritas. As I remembered all too fondly my New Year's Eve experience, I abstained from mixed drinks, sticking solely to beer and water. My father had never seen such a display of fireworks, especially at the neighborhood level. He likened it to a 2-hour version of the "Grand Finale" at the Cotton Bowl.

My son and I had quiet evenings at home the rest of the week, but he's spending this weekend in Tulsa with his best friend (which necessitated the purchase of his first real set of luggage) and I will be driving back to Pawnee Rock for the remainder of the week, returning this weekend for Wichita's annual AnimeCon with my daughter. 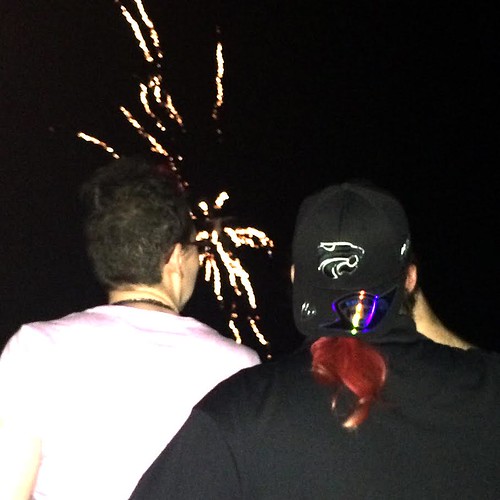