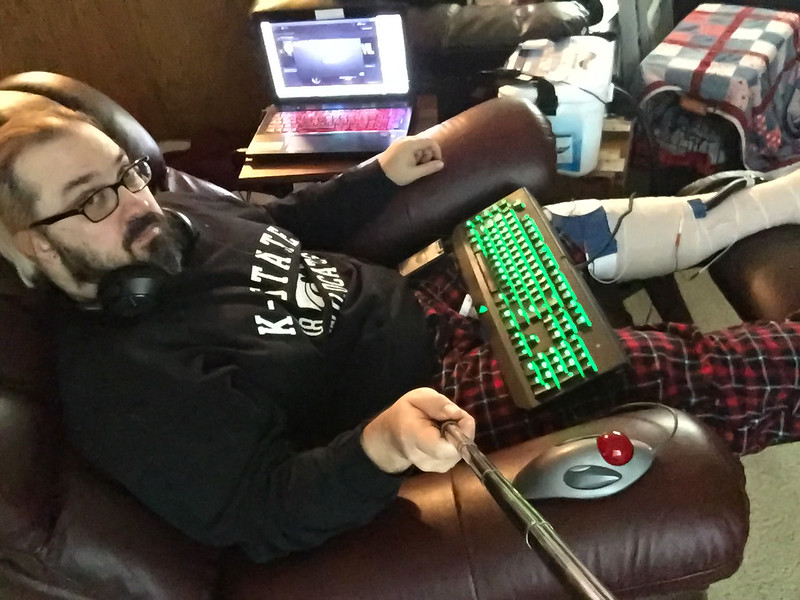 My knee surgery had been scheduled for over a month, and I was so excited I could hardly concentrate on anything else the week leading up to my Monday appointment. When a fever developed overnight the Thursday prior, I was afraid I would lose my surgery date. Excitement for the procedure aside, both GF and I had scheduled a week from work post-surgery for recovery, and there would be quite a bit of logistics involved to rescheduling everything.

There's a long list of medications and supplements you can no longer take leading up to surgery, most of which are exactly the kind of thing which can eradicate a fever or soothe a cold. I called the surgeon's office and the nurse told me as long as I didn't take any of that stuff, they'd consider keeping the appointment as long as the fever didn't recur, and to let them know Monday morning if I needed to cancel. Sadly, I had the fever again Friday night, leading into Saturday morning. Knowing by then they'd cancel me regardless, I took all the good cold medicine and got a fantastic night of sleep Saturday night, pulling out of the cold in earnest Sunday. I called the nurses' station to update them and let them know I'd blown my list of things not to do.

Now, I'm not saying the surgeon didn't have a payment past due on his Maserati, but he called me himself Sunday afternoon and suggested we not only stick to the original surgery date, but move me up two hours (essentially nullifying the list of pre-op requirements) and as I'm not one to argue with a surgeon (unless he believes the pyramids were built for...grain storage), we agreed to proceed as planned.

I was so excited, I couldn't sleep. I think I managed three hours that night. The initial appointment at the surgeon's office had been handled quickly and efficiently, the pre-op the previous Monday at an auxiliary hospital had impressed me with their friendliness and efficiency, and I was finally going to the main campus downtown!

Only...It was like one of those really old hospitals you only see in horror movies. I swear I could still see the avocado walls under the thin layer of whitewash. I changed into my gown and laid in the bed adjacent one of those ancient, gurgling radiators to which serial killers are always handcuffing their next victim. One nurse took all my vitals, followed by one who came in to shave my leg and slather it in two coats of betadine before wheeling me into pre-flight. As an aside, everyone who came in contact with me expressed some sort of silent astonishment that I was stark naked under my gown, which had me start wondering about their expectations - I really couldn't put my finger on it. Anyway, I say pre-flight because it reminded me of an airport; people in beds being taxied, parked, "refueled" and moved out. It was a bustling place. I had all my vitals taken again, and a visit from both the anesthesiologist and the surgeon. The former who asked me if I wanted a nerve block, to which I replied, "I have no idea, why am I just now being informed about this?" and the latter who wanted to know if I had any questions for him; "Why did you not mention to me the nerve block and what are the pros and cons?" (I ended up declining based on that conversation). There hadn't been much of a delay from the time we walked in until I was in pre-flight, and with only a 45-minute surgery, I was excited to get to it! The nurse then gave me a sedative, and I have no recollection of anything else.

In the surgical waiting room they had this huge television displaying patient IDs (for privacy) and where they were in the operating process; pre-op, staging, anesthesia, starting surgery, surgery underway, recovery, patient room. Because they kept scanning the bar code on my wrist every time they moved me, I assumed that updated whatever real-time database was tracking all the patience movements, much like how FedEx and UPS track the movement of billions of packages all over globe - not that GF would have time to watch the screen as the plan was to have her sign for the polar pack cold therapy device, the transcutaneous electrical nerve stimulation unit, and my prescriptions. But no, the display in the surgical waiting room was an Excel spreadsheet being updated by a geriatric volunteer who was transcribing from little yellow sticky notes written in pencil. When she wasn't accidentally deleting rows and cells. Or forgetting to update the information. For FOUR HOURS. GF sat in that room for four hours without a single update. And without the polar pack, without the T.E.N.S unit, and without a prescription. Believe me, when you've watched as much Grey's Anatomy as she has, it's never a good sign.

I awoke in recovery coming out of a very refreshing sleep, and half an hour later was back in my room, reunited with GF. That's when the alien-abduction scenario hit. As soon as I discovered I'd been gone so long, I started asking GF for information - what updates had they given her which explained the long surgery? I couldn't understand why she wouldn't in turn relay that information to me. I didn't understand that she'd gone the entire time without any updates herself. Oh, that poor nurse they sent in to kick me out of the room as quickly as possible! We both started firing questions at her for updates on pretty much everything. None of our questions were answered amidst a growing feeling of unease.

The nurse turned to GF and let her know I was to stay completely off my foot for a FULL MONTH as the damage sustained was a little more extensive than the MRI had shown. This was...unexpected news; I was planning to be back to full capacity far sooner. As we were absorbing this, we noticed my dressing was unadorned. I should have been layered with a cold-pack and electrodes, leaving the respective circulation tubes and leads exposed - for the polar pack and T.E.N.S. to attach to - yet none of that happened. And I was hot. So hot, I thought I was going to blow chunks. I wanted to hydrate quickly, and the nurse kept telling GF she would bring me another cup of ice water but she never did. Throughout all of this, I thought I was communicating very clearly. I even asked GF, "Am I slurring or not making any sense?" (No), but the nurse kept telling GF that no matter how much morphine they kept giving me, it hadn't done anything to alleviate the pain, so they'd ended up giving me two units of dilaudid, twice the amount they normally give anyone, she said. I began actively listening to myself clearly articulate to the nurse, the reply to which would be NOTHING - presumably because she thought I was bombed out of my mind. I was appalled she wouldn't help me dress, walk, or urinate, all the while saying in an inappropriately jovial tone, "He's got to learn to do this on his own!" I was all like, "Sure, but right now? I have to learn how to do all this RIGHT NOW?" ("He's got to learn to do this on his own," she repeated to my GF. I finally realized she hadn't once spoken directly to me.

All of a sudden I'm Commander Peter Quincy Taggert onboard the NSEA Protector asking Sigourney Weaver to ask the computer a question for me. "Please ask the nurse when they're going to unrap my leg to apply the electrodes."

"When are you going to unwrap his leg to apply the electrodes?"

"We're not allowed to touch the wrappings but as soon as you leave you're welcome to do it yourself."

"Please ask the nurse when she expects the T.E.N.S. unit to arrive."

"We don't order that so we don't have any way to track it. Once you leave, you can follow-up with your doctor's office."

"Please remind the nurse our doctor told us we'd need the electrodes to be placed before we can use the T.E.N.S. unit."

It was ridiculous. And I was growing increasingly hot. I asked GF to ask the nurse to lower the heat in the room. She couldn't. I asked GF to ask the nurse if our windows opened. They didn't. I was so hot I just knew I was going to barf. At some point different people arrived with both the polar pack and the T.E.N.S. but with nothing prepped in the bandages, these were useless and we'd run out of ways to explain these did us no good as I was currently bandaged, much to the increasing consternation of the nurse who was completely baffled as to why we hadn't left yet. GF called the surgeon's office across town for an immediate appointment hoping they could better handle the fallout of this hospital's dismal post-op.

The nurse ordered me to get into the wheelchair unassisted - and started loading us up like pack mules - handing GF the heavy cold-pack unit and having me precariously hold two vertical crutches with one hand. "Not like this!" I must have yelled. "Put the heavy items on my lap where I can bear their weight and hold on to them and please give my GF the crutches to carry."

"Well he's one of those who just has to have everything his own way, isn't he?" she quipped, back to speaking about me rather than to me.

For reasons which still puzzle me, they let GF sign for, and pick up, my Schedule-1 narcotics while I had the patient transporter transport me outside where I could finally cool down, cool off, and hopefully, not barf. GF brings the car around. I'd thought it exceptionally brilliant on my part to drive the roomy Grand Marquis, but found that with my limited mobility and worse, the velour seats, it was like scooting across Velcro. Sliding in and out of the back of that car with those velour seats had me crying tears of frustration by the time we left the hospital to not go home.

It was at this point GF made an unscheduled detour and single-handedly saved the day. She palmed me an iced coffee, and a liter of ice cold water. That made all the difference in the world. The surgeon's office properly wrapped my knee with all the required equipment and sent us home.

Where I discovered far too late they'd told GF, but not me, that dilaudid can make you incontinent.